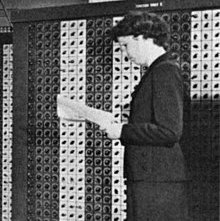 Frances Elizabeth "Betty" Holberton was one of the six original programmers of ENIAC, the first general-purpose electronic digital computer,

She was the inventor of breakpoints in computer debugging. Hired by the Moore School of Engineering to work as a "computor", Holberton was subsequently chosen to become one of the six women to program the ENIAC.

Alongside her colleagues Kay McNulty, Marlyn Wescoff, Ruth Lichterman, Betty Jean Jennings, and Fran Bilas, Holberton worked for the US Army programming the ENIAC to perform calculations for ballistics trajectories electronically. Due to the highly classified nature of the work the women were initially only allowed to use blueprints and wiring diagrams to program the machine. When the machine was unveiled in 1946 it had cost the equivalent to $7 billion.

They all have a place in the Women in Technology International Hall of Fame for their work.