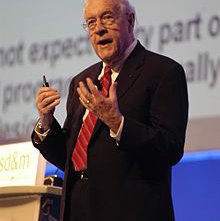 Brooks is a computer architect, software engineer, and computer scientist from the USA.

His best known work is the development of IBM's System/360 family of computers and the OS/360 software support package.

He wrote the book 'The Mythical Man-Month' about his experiences developing this software. Throughout his career Brooks has been the recipient of numerous awards, including the National Medal of Technology in 1985 and the Turing Award in 1999.