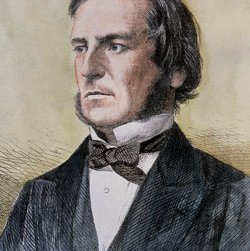 English Mathematician Boole's work on logic is believed to have laid the foundations for the information age.

He worked in the fields of differential equations and algebraic logic, and is best known as the author of The Laws of Thought (1854) which contains Boolean algebra.

In 1857, Boole published the treatise On the Comparison of Transcendents, with Certain Applications to the Theory of Definite Integrals, in which he studied the sum of residues of a rational function.