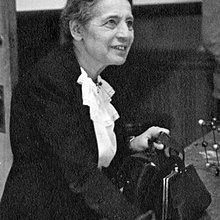 Meitner was part of the small group of scientists (along with Otto Hahn and Otto Robert Frisch) who discovered the nuclear fission of uranium when it absorbed an extra neutron. She understood that the fission, which splits the atomic nucleus of uranium into two smaller nuclei, must be accompanied by an enormous release of energy.It was this discovery that would make the construction of nuclear weapons possible. It also enabled the construction of nuclear reactors to generate electricity. She was the first woman to become a full professor of physics in Germany.