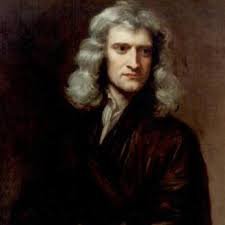 Sir Issac Newton is best known for his law on gravitation. He explained the theory on tides; that they occurred due to the gravitation pull from the sun, moon and earth. He was a key figure in the scientific revolution; his first book laid the foundations for mechanics, he did research on optics, calculus, formulated an empirical law of cooling, made the first theoretical calculation of the speed of sound, and introduced the notion of a Newtonian fluid.